skip to main | skip to sidebar

Deeper Roots and Stronger Branches: The Growth of a Local People’s Assembly 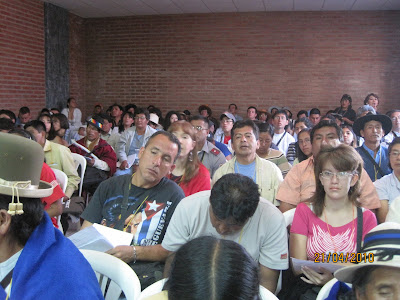 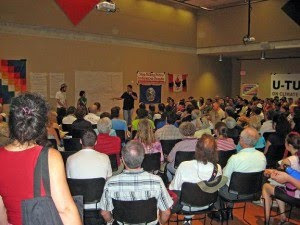 When it was announced that Cochabamba and Tiquipaya, Bolivia, would host the first ever World People’s Conference on Climate change and the Rights of Mother Earth, what also emanated from Bolivia was the call to begin the creation of a Worldwide Climate Justice Movement.

At the conference, from April 18th to 22nd of this year, 35,000 people from 140 countries collaborated to put together working documents to serve as a manifesto of Humanity and Mother Earth’s demands to the UN, and to be presented at the subsequent climate talks in Bonn, Germany and Cancun, Mexico. What Cochabamba achieved beyond the tangible declarations and documents that came out of the 17 different working groups, was a sense of international commonality, a universal energy of collective solidarity if you will, which prompted an urgency for the shaping and mushrooming of local chapters of a Movement across the world.

The gathering which brought together individuals from all walks of life, Bohemians, scientists, writers, observers and spectators, peaceniks, politicians, journalists, activists, and revolutionaries, conveyed and instilled a common web of inspiration and initiative. In April, shortly after returning from Cochabamba I wrote; “to have countless brothers and sisters from all around the world at your disposal to exchange stories, smiles, hugs, handshakes, and ideas is an empowering experience.” And that is what Cochabamba provided, a means by which to mold a common strategy, to establish collective threads to link our efforts and our struggles from continent to continent.

Among the most active and vibrant at the summit were the companeros from the 700-strong Venezuelan delegation. They effectively relayed the militancy and urgency for committed change emerging from Venezuela, and displayed a leadership of work ethic. The Venezuelans were engaging every chance they had, and their activity and participation in the working groups was apparent; their contributions were catalyst to the insistence on the necessity of systemic change woven throughout the declarations.

We also saw in Cochabamba a sizeable presence of people and delegations from Canada; students, affinity groups, indigenous leaders, activists, and unions travelled to take part in the conference. What this group has brought back home, amongst other projects, is the ongoing process of creating a People’s Assembly on Climate Justice in Toronto.

On June 23rd, Toronto’s climate justice community held its first People’s Assembly, which, much like Cochabamba, was structured around working groups. But what we organized on June 23rd, which also happened to be the same week Toronto hosted the G20, was put together to become a People’s Assembly, not just another conference.

Moving forward now, our People's Assembly needs to be a permanent space and a routinely occurring gathering, as it becomes imperative for us to integrate consistency into our organizing. An idea would be to hold the Assembly monthly, or every two months perhaps. It is essential to hold the Assembly regularly because we want to retain momentum, we want to keep the new faces committed, and the public engaged. And, an important point to outline, something a companera pointed out to me, is that the Assembly can be set to convene on a regular schedule but not limited to that. We do not want to place any limitations or restrictions on the Assembly, it is an entity of the people for the people, a mechanism or a vehicle for communication and dialogue that can be called upon by anyone, at anytime, whenever needed.

Another thing to mention is that a structure, or format is needed, but no control; a completely horizontal and unleashed process set free. A little bit of chaos is good, it allows some of the originality and creativity to organically come to life.

We also have to prioritize urgency and timeliness with this endeavour. There are two reasons why our next Assembly needs to happen as fast as reasonably possible, well organized and promoted of course, but sooner rather than later. First, because it appeals to so many different constituencies, Climate Justice at the moment is a unifying force, and an asset for movement building. In Toronto, the first report back from Cochabamba, on May 7th of this year, featuring several summit participants, attracted a lot of unexpected attention, drawing in over 250 people. Then on June 23rd was our first People's Assembly on Climate Justice which was very successful, also producing a turnout of around 250 people. There was very positive energy coming out of the Assembly. Also on the 23rd, the Toxic Tour, a rally targeting Canada’s most environmentally destructive extractive industries and institutions, full on with costumes, flags, and floats paraded through downtown Toronto. So in general, Climate Justice in the city is currently building on momentum.

Second, the reaction to the G20 in Toronto has presented us with a golden opportunity. The G20 invasion affected not only activists and protesters, but impacted people from almost all walks of life. The projection of repression was manifest all over the downtown core and certain other areas, and the absurdity produced many self-declared converts to the cause. And, with Stephen Harper and the Consevatives' track record on environmental issues, this was obviously good news for the Climate Justice Movement in Toronto. Throw the Toxic Tour into the mix, which was Climate Justice's very creative, well orchestrated, and timely cross-pollination of two currents, and it almost seems like G20 week and the Climate Justice Movement were a match made in heaven. At the moment we have momentum and new faces on our side, we should not take that opportunity for granted.

Beyond Cochabamba, what were Toronto’s reasons for moving in this direction? At least in small part, the decision to build a People's Assembly in Toronto was probably an organic response to something the CJEJ community felt was needed. At the moment, Climate Justice has a broad and pertinent appeal that spans internationally over most spectrums of the left, it is the 'hot' issue, if you will. And, in Canada, we have the TSX where more than 70% of global mining capital is headquartered, we have the Tar Sands, and we have a government which is completely indifferent to Indigenous rights and environmental devastation, and doesn't recognize water as a human right. So in Toronto, as in the rest of the country, we certainly have a strong case and a need for increased and improved Climate Justice Solidarity. In part, the energy for the People's Assembly is an expression of that.

Referring back to Cochabamba, we dealt with a format of working groups, and it is imperative that we look back at past creations and examples of People's Assemblies from across the world. However, we are dealing with a unique situation here in Toronto, and a whole new set of attributes and particularities, and we don't know yet if the working group format will work for us. The final product of our assembly might be very similar to a working group structure, or it might look drastically different. Basically, we don't know what our assembly will look like, we are starting from scratch. We have to let the process self-create, with as many people involved as possible.

So what might an alternate Assembly format look like? A permanent, routinely-occurring, city-wide grassroots organizing assembly or forum sectioned by various affinity groups and organizations, or oriented around neighbourhood councils, or even a complimentary combination of both. There are already dozens of groups and organizations in the city, experts and veterans who have been working and campaigning around specific issues for months and years. It would be effective to communicate with all these groups, and to have them come be an integral part of the Assembly process, thereby providing all Assembly participants with already-existing resources, knowledge, capacity, and experience, and to allow them to choose where they would best fit in, for them to identify which patch on the community solidarity quilt is best suited for their interests and abilities. Working groups might end up being the appropriate format for the Toronto People's Assembly, only time will tell, but if so, perhaps those experienced affinity groups and organizations should be incorporated into them not as the lead, but in the middle actively working with the people in a nexus support role. Or, working groups could serve as a convertible feature of the assembly to be convened when needed for more extensive tasks and emergency campaigns.

One final attempt at an all-inclusive definition of the People’s Assembly would be this: A city-wide Assembly as a mechanism of solidarity and movement building, to really start to define and to shape the Movement. The Assembly will be composed of different groups and organizations from all spectrums of Climate Justice, who come together to report and share tactics, strategy, and campaigns in an open horizontal space fueled by popular power, participatory processes, and consensus. The Assembly will serve as a vehicle for an ongoing dialogue of solidarity building, sharing, and collective community decision-making.

The seeds of Cochabamba have ripened to create a fabric of popular resolve from Tanzania to Ecuador to Afghanistan, from cities to jungles, from affinity groups to community centres to cooperatives. A People’s Assembly is the body, the vehicle, and the necessary mechanism to engage us into effective movement building. The idea and the initiative have been laid out for us. It would be a mistake to take that privilege for granted, and to miss the opportunity.

All together, South American leadership in the form of the Rights of Mother Earth Conference has provided us with fodder, with building blocks, with motivation, and with direction. Now, with horizontal impetus we must activate the grassroots to embrace our responsibility to construct something substantial, effective, and beneficial to provide the movement with an opportunity to take flight.
Posted by Julien Lalonde at 12:22 AM